Kenneth Phillips is back at Pensacola State to face the music 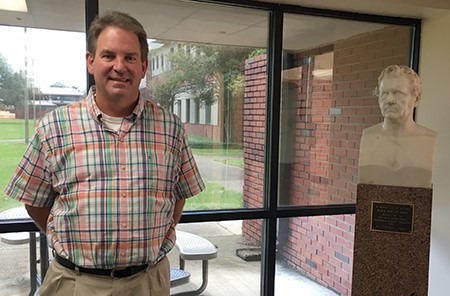 Now, 37 years later, Kenneth Phillips is back at the College and though the surroundings are familiar, the job is brand new. Phillips is now the head of the Pensacola State College Performing Arts Department.

“It’s a little weird that I’m now my former guitar teacher’s department head,” said Phillips, who recently left his position as Chairperson of Music at Palm Beach Atlantic University, where he was also a music instructor. “We got to talk a bit the other day and do a little reminiscing. It was nice.”

Phillips is doing a lot of reminiscing just days into his new position.

“Two doors down I took music theory,” Phillips said from his office. “I’ve been on the stage here. I sat in this very office as a student, but on the other side of the desk. I’ve got a lot of great memories here. Coming back to Pensacola is a blessing for me and my wife.” (His wife, Elizabeth, is also a music teacher and has already started her new position as the Choral Director at Escambia High School).

He succeeds former Performing Arts Department Head Don Snowden, who retired this summer after spending 33 years at the College.

“I was already gone when he started here,” Phillips said of Snowden. “But I knew about Don Snowden even before that, when he was teaching (in Baldwin County, Alabama). There’s a strong tradition here at PSC and the Performing Arts Department has a great reputation in town. It’s a respected department and an important part of the amazing arts scene in Pensacola.”

Phillips came to PSC as a voice student and studied piano and guitar. He sang in church choirs and choruses at area schools including Pleasant Grove Elementary, Warrington Middle and Escambia High schools. He also played baritone horn in the Escambia High School Marching Band.

“I’ve always enjoyed singing but I knew I was not going to be a professional singer,” he said. “I love teaching. At Temple, I learned so much about teaching and how we learn music. You study the process of what’s going on in the brain when you’re making these musical connections.”

Phillips hopes to add more features to the PSC Performing Arts Department, which offers associate degrees in music and theater.

“We have been successful as a traditional music school, but we want to expand the offerings,” Phillips said. “We would like to look into commercial music and music production.”

He wants to appeal to songwriters and musicians who might not be in traditional bands or choruses, but still have a desire to create music.

“It could be reaching out to the girl at church who is writing praise songs,” he said. “Or the kid who learned guitar from his best friend and has been practicing in his room. We can’t do it all overnight, but we can do so incrementally. Eventually, we’d like to provide more opportunities to those students who have commercial desires.”

Stallings was only in his second year of teaching when Phillips came to the College as a student.

“I don’t remember a whole lot except that he was a pretty good student,” Stallings said. “We’ve had a chance to talk since he started his new positions here and he made a good impression. It was a comfortable discussion. But the poor guy just started Monday, so it’s kind of early to say much more than that. My professional feeling is that he’s going to do a good job.”