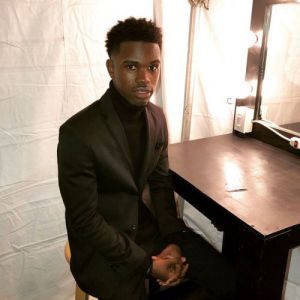 A few years ago, you might have happened upon DeWayne Crocker Jr., singing in a local Walmart Supercenter or heard him belt out the National Anthem at a high school basketball game.

These days the Pensacola State College music major has a much larger fan base that includes some of the most well-known celebrities.

One of those fans ─ Serena Williams – requested that Crocker sing at her Nov. 16 wedding to Alexis Ohanian Jr., at the New Orleans’ Contemporary Arts Center.

“I was booked for the wedding back in February but I didn’t know whose wedding it was,” said Crocker, who was the 2015 winner of the BET’s “Sunday Best: Race to the Stage” competition.

“I didn’t realize it was Serena’s wedding until the soundcheck. She was walking around and I saw her. That’s when it clicked that this was her wedding.”

The 2013 Escambia County High School graduate – who has performed on national television several times – described the event as the biggest night of his life.

“I met Beyoncé, she’s a very classy but regular person. Of course, Serena’s sister, Venus was there, Kim Kardashian. It was a who’s who of celebrities,” he added.

Crocker and backup singers, Restored, sang three songs for the couple – “Let’s Get Married,” “Endless Love” and “Lean on Me.”

Crocker who has a dominant social media presence was told that Serena Williams saw his videos and personally requested him.

“I feel so blessed to have been asked to sing. I never expected anything like this. I would have expected her to ask someone like John Legend to sing at her wedding ─ not me,” said the 21-year-old who began singing at area churches when he was 5 years old.

New Edition also performed during the wedding along with the New Orleans funk/jazz band, Naughty Professor.

“I took one of my brothers, Keoki Simmons, with me and some members of the paparazzi thought he was a member of New Edition,” Crocker said laughing. “We were all caught up in the experience and were bombarded with questions from the paparazzi too.”

“I was just a college kid and she was very humble, very kind, very sweet when she came over and spoke with us,” he remembered.