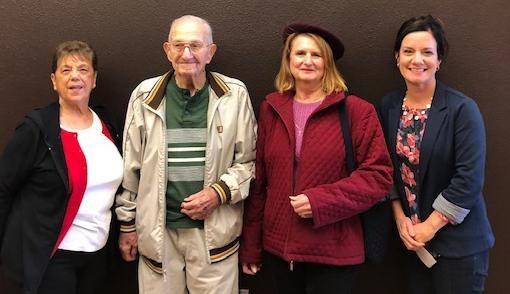 Members of the PSC Senior Citizens Club recently presented the PSC Foundation with $2,000 targeted for the College’s performing arts programs.

“We’ve been to the Lyceum performances so many times and have just been blown away,” says club president Theresa Gels, seen at left in the photo, with James Manara, club founder and former president; club member Sharon Livingstons; and Foundation finance director Susan Peaden. Gels says the club has given $2,000 to the College each year for the past four years.

The PSC Senior Citizens Club, which meets at 2 p.m. on the third Tuesday of each month in the PSC Pensacola campus Student Center, is open to anyone 60 years of age or older, or who has a spouse of that age. (Members also must be citizens of Florida.) The next meeting will be March 17.

“We have two ice cream socials a year, an annual picnic at Bayview Park, and recreational swimming, tennis, pinochle and bowling,” Gels says. “And we have a good time at our meetings. At Christmas we have a blowout, everyone gets a Christmas gift.”